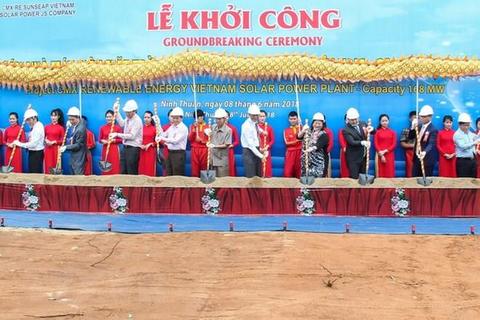 Per a deal between Viet Nam and Singapore, the project is expected to become operational in June 2019 and produce enough electricity to power up to 200,000 households and create jobs for 200 labourers.

“Within eight months of receiving the decision on investment policy, the investor has shown great effort to acquire all relevant permits and meet all the necessary conditions to start construction of the solar power plant,” said Pham Van Hau, vice chairman of Ninh Thuan People’s Committee.

Hau said the plant is the fourth solar energy project in the province to start construction this year. The province is working to become one of the renewable energy centres in the country.

Ninh Thuan Province has been given much attention from investors thank to its advantages in renewable energy development. The province has the highest wind speed of 7-8m per second, more than 2,800 sunshine hours a year and solar radiation of 230 kcal per cm2 per year, favourable conditions for developing solar power.

The province aims to develop solar power totaling 2,000MW by 2020 to fully tap into the potential.

Ninh Thuan People’s Committee has granted investment decision to about 30 solar power projects. Of which, three projects started their construction with total capacity of 130MWp and are expected to become operational in the second quarter of 2019.— VNS