The overload began in June when a large number of plants went on stream simultaneously to beat the June 30 deadline to enjoy price incentives of 9.35 U.S. cents per kWh feed-in tariff (FIT) for the next 20 years. 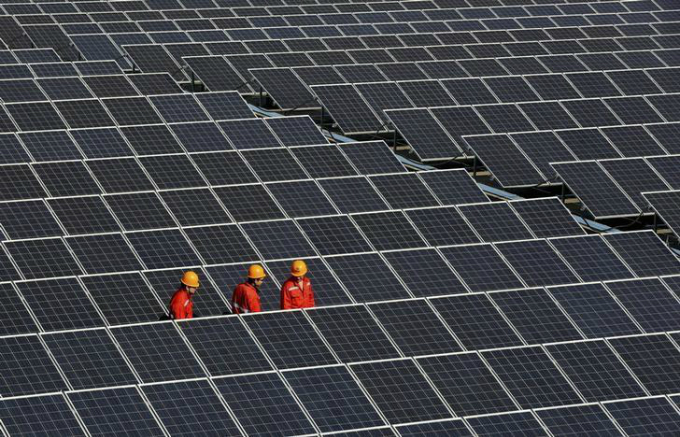 The rapid construction of the new solar farms means the power grid has been unable to keep pace. Photo by Reuters/Kham

Post-June 2019 solar power projects may expect a lower FIT rate of 7.09-8.38 cents per kWh, according to a proposal of the Ministry of Industry and Trade recently submitted to the government.

The 81 along with five others in the first quarter added a total of nearly 4,500 MW to the grid, equivalent 10 percent of the national grid’s power capacity.

The national plan had only envisaged adding 850MW by 2020. The rapid construction of the new solar farms means the power grid has been unable to keep pace. In some areas, transformers and line axes are reportedly operating at over 200 percent of their capacity.

One 110kV line in Ninh Thuan Province is reportedly operating at 260-360 percent of its safe capacity, the National Electricity Regulation Center said. Ninh Thuan is a southern province with high levels of solar radiation that has got seven new solar power projects in just the last two months.

In June the center had exhorted several renewable energy plants in Ninh Thuan to cut production so that the new solar power plants could connect to the national power grid.

Luu Xuan Vinh, Chairman of the Ninh Thuan People’s Committee, said renewable energy plants with a capacity of 2,000 MW have been approved in the province, but the capacity of the transmission grid in the area was only 800-1,000 MW.

By the end of June renewable energy projects with a capacity of 1,300 MW had already been connected to the grid, most of them solar plants.

Earlier this week the Binh Thuan Wind Power Association complained to the Ministry of Industry and Trade and Vietnam Electricity (EVN), the nation’s sole power distributor, that wind power plants in Binh Thuan Province had been forced to cut output by 38-64 percent to accommodate new plants in the grid.

“We will definitely make losses this year with the production cuts, and we still have foreign debts to repay,” Bui Van Thinh, the association’s chairman said.

New solar plants too are not allowed to operate at maximum capacity. One plant in Ninh Thuan said it has received requests from the national regulator to cut production by 30-60 percent every day.

A massive number of plants had been approved without considering the capacity of the national grid, Thinh said.

According to EVN, the power grid is facing the highest overload in Binh Thuan, Ninh Thuan and localities in the central region which receive the highest solar radiation.

“Construction of a 220-500KV line requires 3-5 years while a solar plant only takes six to 12 months,” an EVN executive said. “In some places, plants have sprouted from what was vacant land only two months ago.”

Speaking to VnExpress, Bui Quoc Hung, deputy director of the Ministry of Industry and Trade’s department of electricity and renewable energy, said too many power projects also come up when they are in provincial plans but not integrated into the national plan and vice versa.

The EVN management has pledged to free up grid capacity to link all solar plants by the end of 2020, and directed its units to speed up work on ongoing transmission projects.

As of September last year, over 120 solar projects had been approved to contribute to the national grid, with a total capacity of 6,100 MW by 2020 and 7,200 MW by 2030, according to the Ministry of Industry and Trade.

Another 221 projects with registered capacity of over 13,000 MW are pending approval.

This means the total registered capacity of solar power projects in Vietnam could reach 26,000 MW, accounting for 60 percent of total capacity from all sources, exceeding the government’s initial target to have 850 MW by next year and 4,000 MW in 2025.